A highly-driven and groundbreaking Astrobiologist & Exo-Geologist in Sri Lanka has written about “unique Neolithic petroglyphs” that match nothing else ever discovered on Sri Lanka, carved on cave walls on the legendary “Alien Mountain”.

Dr Aravinda Ravibhanu Sumanarathna  (PhD), is the CEO & Senior Research Scientist at the South Asian Astrobiology & Earth Sciences Research Unit and as a working Astrobiologist & Exo-Geologist he searches for “extraterrestrial life, with a focus on paleontology and pretology.” The scientist wrote an email to Ancient Origins declaring that, “For the first time in Sri Lanka, we have found, petroglyphs associated with Neolithic People” and he attached a link to his preliminary report called “ Danigala Coding Sri Lanka .” This is the story of the lost Neolithic petroglyphs of Alien Mountain, a somewhat sensational name which will shortly find good reason. The Ancient Inhabitants of Alien Mountain

Evidence suggests Paleolithic people arrived in Sri Lanka about 300,000 BP, and some claim it maybe occurred as early as 500,000 BP , and in ancient times this island was a rich hunting zone for Mesolithic and early Iron Age inhabitants, right up to the Pre Anuradhapura period in 543 BC.

Danigala Circular Rock is a unique geological formation situated in near Aaralaganwila, in the Polonnaruwa district, about 46 kilometers (28.5 miles) form Polonnaruwa along the Maradankadawala-Habarana-Thirukkondaiadimadu Highway. According to the national website, Attractions Sri Lanka , the rock is a “UFO sighting hotspot” known locally as “Alien Mountain” and Dr Aravinda Ravibhanu tells us that the earliest habitation of the region has been dated to 125,000 BP by Dr Deraniyagala .

In reality, but still well ‘out there’, seven centuries ago a semi-divine entity who was legendary for skipping astral-planes was worshipped in a cave on this bizarre rock, who went by the name of Siddhārtha Gautama , “The Buddha,” who is featured in a brick and stucco cave statue measuring around 12 meters (40 ft) in length. Landscape of a Forgotten Culture

The new paper titled “ Danigala Coding Sri Lanka ” describes this entire region as being “rich with numerous geological and geomorphological formations,” representing the region’s abundance of eco-diversity that has accumulated since the Precambrian, which spans from the formation of Earth about 4.6 billion years ago up to the emergence of the Cambrian Period, about 541 million years ago, when the first hard-shelled creatures appeared.

And for all these reasons, and many more, the scientist wrote in his new paper that the “distinction of environmental elements relevant to archaeology, astronomy, biodiversity, and cultural factors makes this land unique.” But until now, nobody knew just how unique. The First Ancient “Bind Runes” Ever Discovered On Sri Lanka

The new archaeological discoveries came after a preliminary archaeoastronomical and geological survey had been conducted by The Central Cultural Fund (CCF- Polonnaruwa-Alahana Parivena Project) with the corporation of South Asian Astrobiology & Earth Sciences Research unit of Eco Astronomy Sri Lanka. The team of researchers rediscovered petroglyphs on the northwest slope of Danigala inselberg and according to Dr Aravinda Ravibhanu, while these ancient carvings are comparable with other archaeological sites in Sri Lanka and South Asia region, it is “the very first time these particular types of symbols, known as “bind runes,” have ever been discovered”. Bind runes are when two or more runes are connected or ‘bound’ together.

Edakkal Caves were rediscovered in 1894 by British Officer, F. Fawcett, and while this vast collection of ancient carvings can be compared with “Chithra Lena” petroglyphs discovered at other archaeological sites found in Sri Lanka and South Asia, the new paper says these carvings “are systematically not similar to any of the rock arts found in Sri Lanka.” According to Fawcett it was “Neolithic people” who used the Edakkal Cave in India as a rock-shelter and the new study supports this notion that the petroglyphs at Danigala too are Neolithic in origin, having dated the carvings to around “4,500BP -5,500BP,” from evidence gathered in burial pits, microliths and pottery fragments. Here are some of the Edakkal Cave engravings, with obvious similarities to those studied at Danigala (Vengolis / CC BY-SA 4.0 )

Carved humans, peacocks, plants, dogs, ladders, arrows, bow, and geometric signs emblazon every available space in the caves and some of the larger petroglyphs measure up to 7.5 meters (25ft) in length by 5 meters (16 ft) in height. Together, the ancient carvings are described in the paper as “mute cultural vestiges which include archaeoastronomical background of a bygone society,” and some of the primitive religious practices and beliefs of the ancient cave dwellers “still lingers in ethnic societies, the meaning of which is never pondered but continued merely as traditions,” according to the researcher. And he also believes that some of the apparently random geometric signs are actually ancient “bind code,” representing “a lost astronomical counting system.” 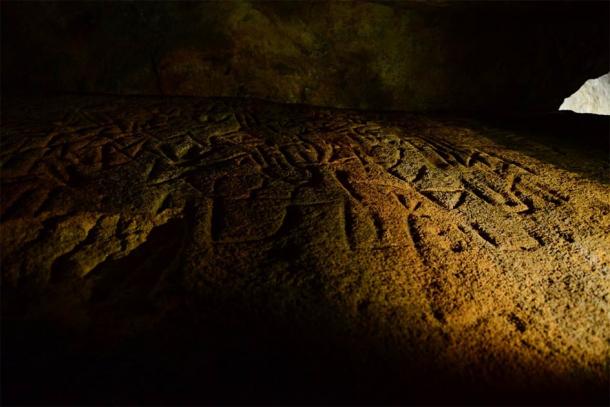 Left side wall at the middle of linear chamber representing anthropomorphic figures like Human and bind code of mastermind.  (Image: © EASL | CCF-Polonnaruwa)

So what on Earth does one call such a discovery in the important witty closing words of a news article? The entire region is a lost geological and ecological treasure, while the petroglyphs and carvings are archaeological, anthropological and astronomical holy-grails, and together they represent what the author of the new paper emotively calls “the collective memory of the anthropomorphic scenes, affected by Mother nature”.

It is because of the multifaceted nature of the discoveries presented in this new paper that the site will be developed in such a way that all of these hitherto unknown aspects of Sri Lanka are, first sustainably managed, before being developed into a center of “Geo tourism, Astro tourism, Archaeo tourism and Adventure tourism.” But ultimately, this project will bring much needed new income streams into the economies of the local indigenous communities who maintain many of the ancient traditions of the Neolithic hunters, who carved their astronomical observations in geometric forms in the caves of Alien Mountain.