Ancient Mummy ‘With 1,100-year-old Adidas boots’ Died After She Was Struck on the Head As well as her amazing ‘modern’ footwear, this Mongolian ‘seamstress’ went to the afterlife with four changes of clothes, her sewing kit, a horse, and a ram’s head. New pictures of the mummy’s remarkable red striped boots – first highlighted by The Siberian Times in April last year and now cleaned up after being buried in a grave for around 1,100 years – have been released. When they were first seen, they were immediately likened to the Adidas design.

Now their modish appearance is even clearer, and it intrigues Mongolian archeologists and ethnographers.

One local fashion expert said: ‘Overall they look quite kinky but stylish – I wouldn’t mind wearing them now in a colder climate. Those high-quality stitches, the bright red and black stripes, the length – I would buy them now in no time.’ 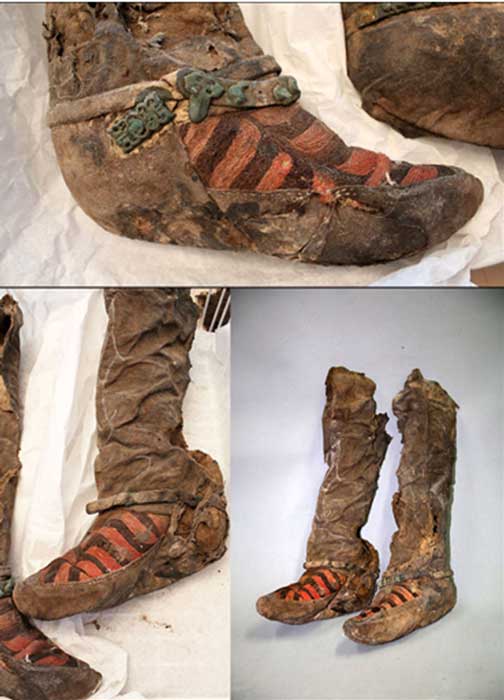 But it wasn’t only the beautifully sewn boots. In her grave, there was a fashionable ancient clutch bag that could be a desirable accessory today. Archeologists found items from her beauty kit – part of a mirror and a comb – and also a knife. She took to the next life a saddle with metal stirrups, found in such perfect condition that it could still be used today. 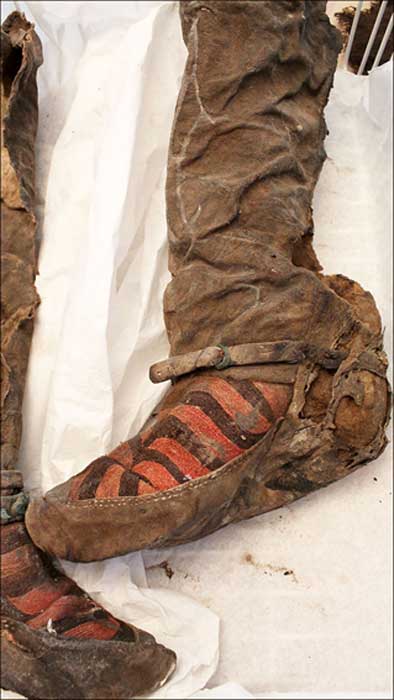 Galbadrakh Enkhbat, director of the Centre of Cultural Heritage of Mongolia, said: ‘The felt boots are knee length, the soles are leather, and the toecap has stitched stripes in bright red colours. With these stripes, when the find was made public, they were dubbed as similar to Adidas shoes with the three stripes. In this sense, they are an interesting object of study for ethnographers, especially so when the style is very modern.’ 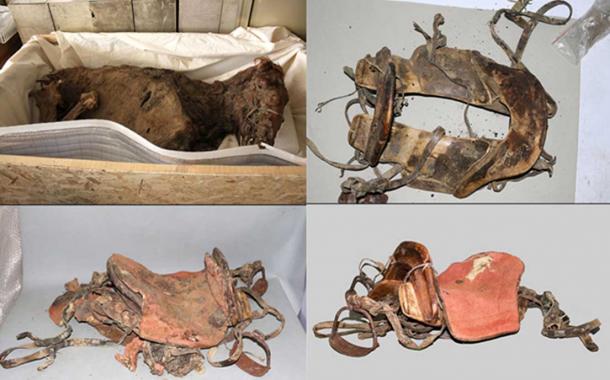 Scientists have also discovered that the mummy suffered a significant head injury – but it is not known if this was the actual cause of the woman’s death sometime in the tenth century in the Altai Mountains of Mongolia.

Nor it is clear if she was attacked or fell, although further research may answer this. 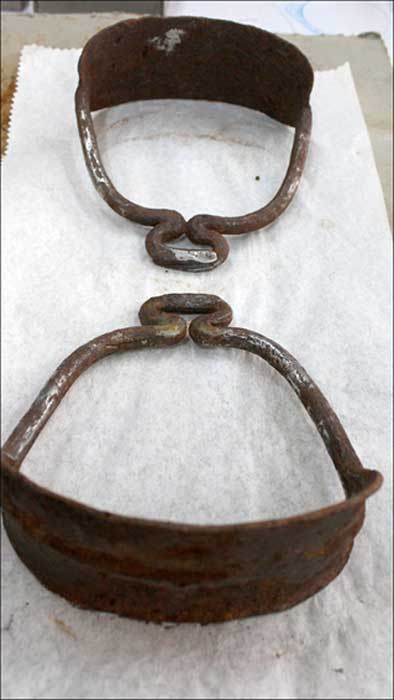 Initial examinations found that ‘it was quite possible that the traces of a blow of the mummy’s facial bones were the cause of her death’, he said.

She is believed to have been aged between 30 and 40. 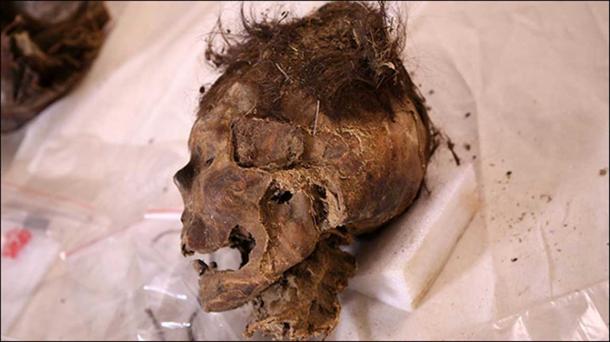 ‘Judging by what was found inside the burial we guess that she was from an ordinary social strata,’ said Galbadrakh Enkhbat.

This is despite the classy appearance of some of the possessions with which she is buried, which might suggest to the uninformed a higher status. ‘Various sewing utensils were found with her. This is only our guess, but we think she could have been a seamstress.’

With her in the grave – found at an altitude of 2,803 metres above sea level – archeologists unearthed 51 items including a ‘stunningly beautiful embroidered bag’, four costumes, vases, a saddle, her sewing kit and the skull head of a ram. 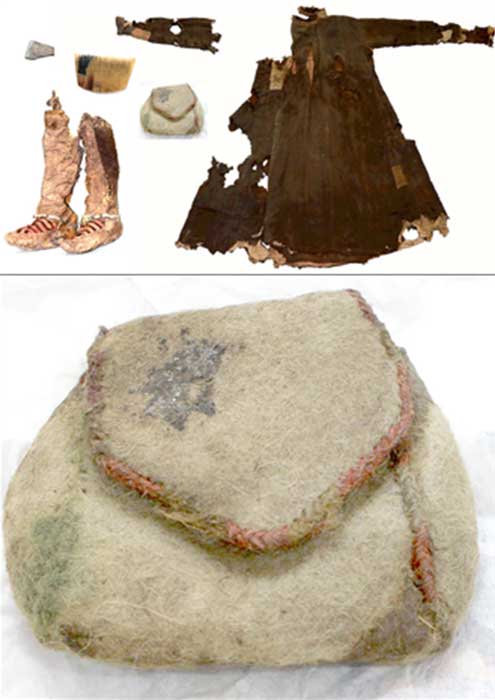 The woman is believed to be of Turkik origin, and the burial is one of the most complete ever found. 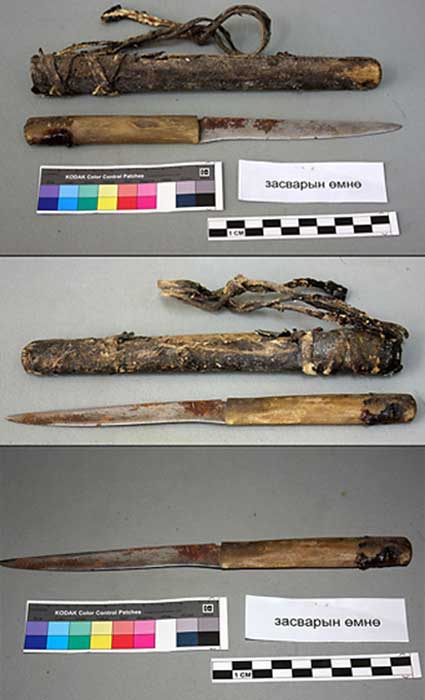 Experts now believe on the basis of 18 samples taken from the mummy that it does not date from the 6th century AD, as first surmised, but rather from the 10th century, but DNA and radiocarbon testing is still awaited.

‘It is the first complete Turkik burial at least in Mongolia – and probably in all Central Asia,’ said researcher B. Sukhbaatar, of Khovd Museum. ‘This is a very rare phenomenon. These finds show us the beliefs and rituals of Turkiks. We can see clearly that the horse was deliberately sacrificed. It was a mare, between four and eight years old.’

He said: ‘When the find was first made in 2015, it was relatively intact but in 2016 some portions of the grave had opened up, livestock animals had eaten some part of it, which prompted the joint team to dig the find and take it to the Khovd museum.’ 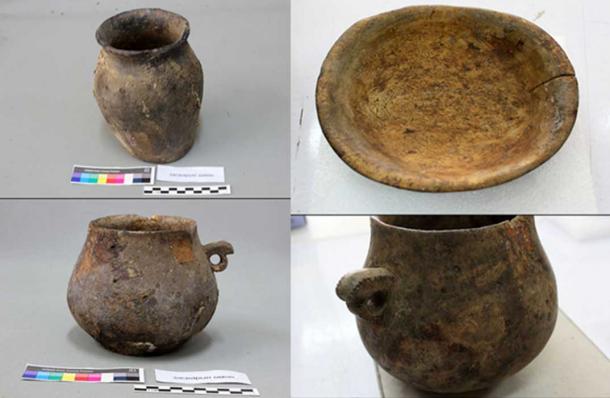