Eltz Castle: A Majestic Medieval Pile Owned by the Same Family for 800 Years Eltz Castle: A Majestic Medieval Pile Owned by the Same Family for 800 Years

Eltz Castle is a majestic castle situated on the top of a rock within a small wooded valley in Germany. Be it through luck or strategy, the castle has been mostly spared from the ravages of war. Apart from the stunning appearance, another interesting fact about this castle is that it has been owned by the same family for more than 800 years.

Eltz Castle (known in German as Burg Eltz) is a medieval castle located in the western German state of Rhineland-Palatinate. Besides its picturesque location, Eltz Castle is also notable for being one of the few German castles on the left side of the Rhine to have been left unscathed over the centuries. Moreover, the castle has been in the hands of the same family, the Eltz family, for over eight and a half centuries. The Elzbach River, a tributary on the north side of the Moselle, surrounds the castle on three sides, which has protected it from the attacks of any would-be invaders. Thus, Eltz Castle occupies a very strategic position in the landscape. Today Eltz Castle is owned by  Dr. Karl Graf von und zu Eltz-Kempenich, alias Faust von Stromberg, the 33rd generation of his family. He lives in Frankfurt am Main and the castle is managed by two castellans (wardens or constables) who are in charge of handling the tourism business and the preservation of the artifacts on-site. Castellans have been managing the castle for centuries.

The history of Eltz Castle goes all the way back to the 12th century. In 1157, a deed of donation was issued by Frederick I Barbarossa, the Holy Roman Emperor . One of the witnesses who signed and sealed the deed was Rudolf von Eltz. Although the present castle was not yet in existence during this time, there was already another smaller castle occupying the same place. 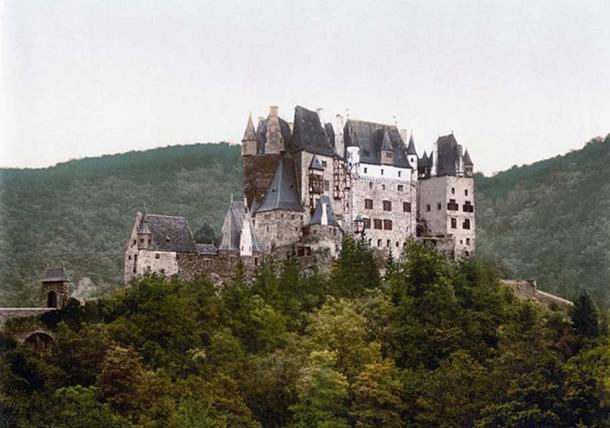 Parts of Rudolf’s castle, such as the Romanesque keep Platt-Eltz, and four floors of the former Romanesque ‘pallas’ (living quarter), have been preserved, integrated into the Kempenich Houses, and can still be seen today.