Archaeologists are quite familiar with the unearthing of human remains. But occasionally they come across burials that are more bizarre and unsettling – from hybrid frankenstein-type skeletons, to ‘vampires’ pinned to the ground with wooden stakes, ‘witches’ held in their graves by heavy stones and individuals with stones wedged in their mouths, iron sickles against their throats, or holes in their skulls that had been drilled to exorcise evil spirits, there are no shortage of strange and grisly discoveries. This Halloween we examine ten such ghoulish discoveries.

In 2014, archaeologists uncovered an ancient skeleton of a teenage girl in Albenga, Italy, which had been buried face down. The researchers said that burying an individual in this way was indicative of the person having been rejected by society or considered a danger, possibly due to accusations of witchcraft. The discovery was made during an archaeological dig carried out by the Vatican’s Pontifical Institute of Christian Archaeology, at the complex of San Calocero – a burial ground on which a church was built around the 5th and 6th centuries AD – located in Albenga along the Ligurian Riviera in northern Italy. The excavation director, Stefano Roascio, said that such burials were carried out as an act of punishment intended to humiliate the dead, and discoveries like this were considered rare. According to the research team, in extreme cases, victims were buried alive in the facedown position, however, this was not the case with the newly discovered burial.

“The prone burial was linked to the belief that the soul left the body through the mouth. Burying the dead facedown was a way to prevent the impure soul threatening the living,” anthropologist Elena Dellù told Discovery News. 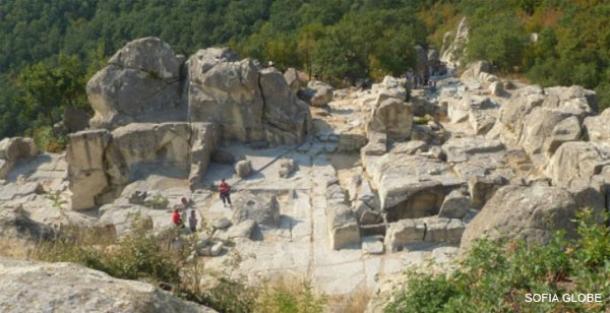 Modern people have not been the only ones fascinated by the undead. Ancient Greeks on the island of Sicily had a fear of revenants so dire they weighed bodies down with rocks and amphora pieces to keep them from rising from their graves to haunt the living, says a researcher. On the other hand and paradoxically, writes Carrie L. Sulosky Weaver in Popular Archaeology, the Greeks also tried to contact the dead for divination through a practice called necromancy.

Earlier this year, archaeologists working in a large cemetery near Kamarina, an ancient coastal town in southeast Sicily, exhumed 2,905 bodies and excavated burials goods. In the necropolis (“city of the dead”) called Passo Marinaro, in use from the 5th through 3rd centuries BC, researchers found grave goods including coins, figurines and terracotta vases. They also found two bodies weighed down at the head, feet and torso with large stones and amphorae, apparently to keep them in their place—the land of the dead, or Hades